Atlas of Histology with Functional and Clinical Correlations book pdf 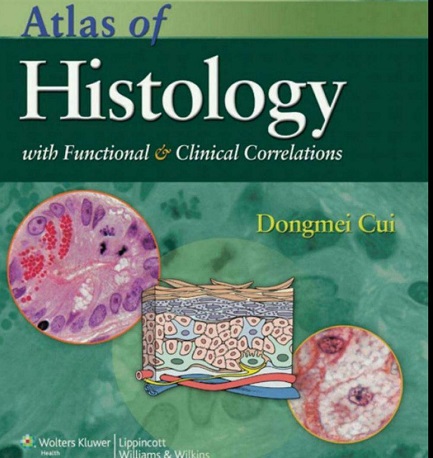 Nucleus Features
Large versus small: This is another
imprecise set of terms, but useful if it’s
possible to make comparisons with nuclei
of other cells in the fi eld of view. Label 1
indicates a relatively large nucleus; labels
۳, ۴, and 6 indicate small nuclei.
Euchromatic versus heterochromatic:
Nuclei of most cells show us a mixture of
euchromatin (dispersed, lightly stained,
accessible to transcription) and heterochromatin
(condensed, darkly stained,
inactive). However, there is a wide variability
in the relative proportions of the two
forms. Nucleus 1 has mostly euchromatin.
Nucleus 6 is highly heterochromatic.
Nuclei 3 and 4 have mixes of heterochromatin
and euchromatin. Notice that the
size of a nucleus is roughly proportional
to its content of euchromatin.
Nucleoli prominent: Presence of an obvious
nucleolus (nucleus 1) or nucleoli
indicates that the cell is actively synthesizing
ribosomes and, therefore, proteins.
Typically, nucleoli are present in a nucleus
that has most of its chromatin in the form of euchromatin, but there are exceptions (for example, some malignant tumor cells).
Mitotic nucleus: When a cell divides, the nuclear envelope dissolves, and the chromosomes are dark, condensed particles. Label 2
indicates the chromosomes of a metaphase cell. Label 5 indicates two clusters of chromosomes in an anaphase cell.
Simple versus segmented: A simple nucleus appears as a single structure that can have a variety
of shapes (round, oval, indented, fusiform, irregular). All the nuclei in this photomicrograph are
simple nuclei. A segmented nucleus, which is typical of some types of white blood cells, appears in
sections as two or more distinct parts (lobes), as seen in the cell in the center of this small panel.
۱ ۲
۳
۴
۲۰ μm
۵
۶
۱۰ μm
Inferences from nucleus appearance: The appearance of the nucleus provides some clues about the state of the cell’s activity. Cells
that are active in protein synthesis will usually have fairly large nuclei, prominent nucleoli, and a preponderance of euchromatin.
Examples of such cells are rapidly dividing cells (which are busy duplicating cell constituents to be divided among daughter cells),
cells that secrete proteins, and cells that have a very large area of membrane and a large volume of cytoplasm to maintain ( e.g.,
neurons).
Cell Size
Large versus small: Although many cell types have diameters falling in the range of 10 to 20 μm, the total spectrum of cell sizes is
much broader. There are cells much smaller (e.g., inactive lymphocyte at about 6 μm) or much larger (e.g., megakaryocyte at about
۱۰۰ μm). If cell volume and surface area are considered things can get pretty tricky, because many cells are not compact spheres or
simple geometric shapes but have other shapes that can be extremely complex.